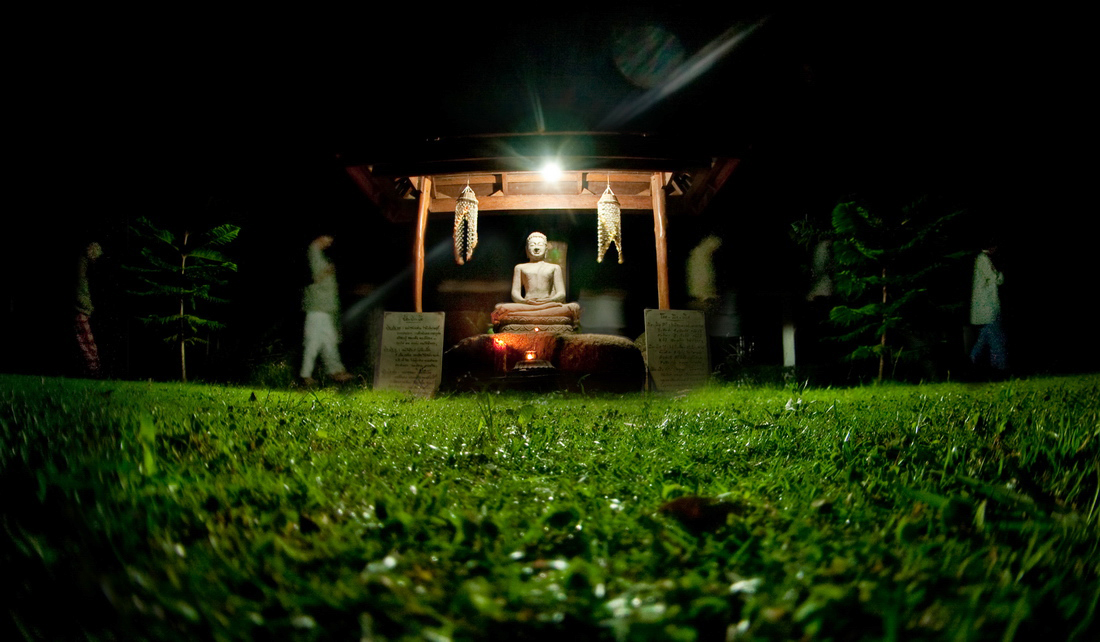 I was standing and looking at the Buddhist nuns slowly bustling in the kitchen. We just arrived, got personal bags (with blankets, mosquito nets, and water bottles) and were wandering around new territory. At that moment I got approached by Cyril who worked there as a volunteer, and he said a genius thing:

“Don’t expect anything from these 6 days, just live.”

Of course, at first I thought about the results. When I was going to a meditation course (retreat), I wanted to keep silence and be quiet for a week. I wanted to learn how to see those things that surround me day by day, to understand myself deeper at the existing moment, and don’t bother about past and future. Dreaming in general. 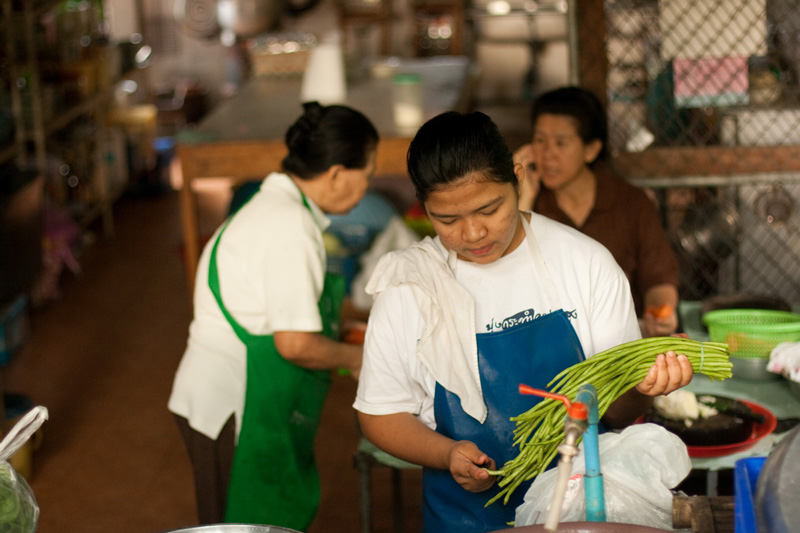 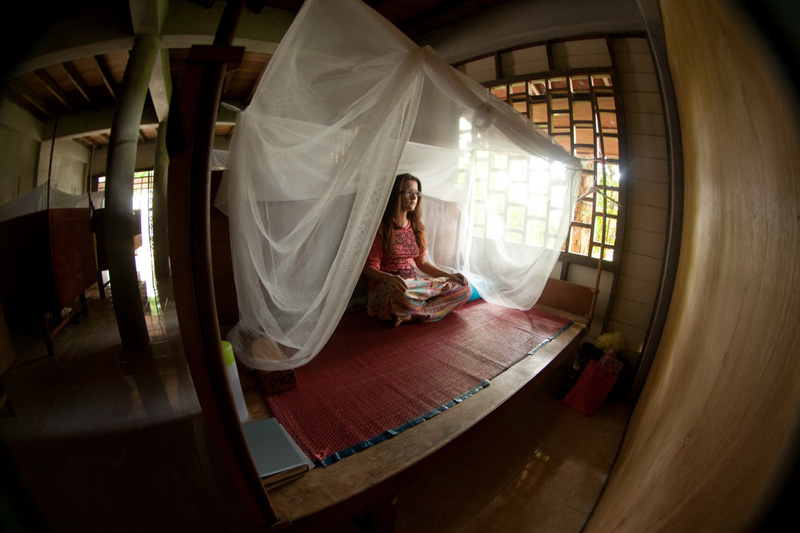 Retreat in the Buddhist meditation center Dipabhāvan on Koh Samui lasts 6 days. A wooden bed with a mat, wooden pillow, getting up at 4.30 am, no books, no computer, no phone and camera, no connection to the world, absolute silence and meditation for 5 hours a day – it’s just everyday stuff of meditation centers. This phrase is more important: “Don’t expect anything from these 6 days, just live.”

After a week of silence I forgot how to speak Russian. It seemed I had to learn it from scratch. Once you realize how many unnecessary thoughts and phrases mixed in your mind, letters are not written in the old easy way. It’s similar to a colt trying to make the first clumsy steps with long legs. A very strange feeling. 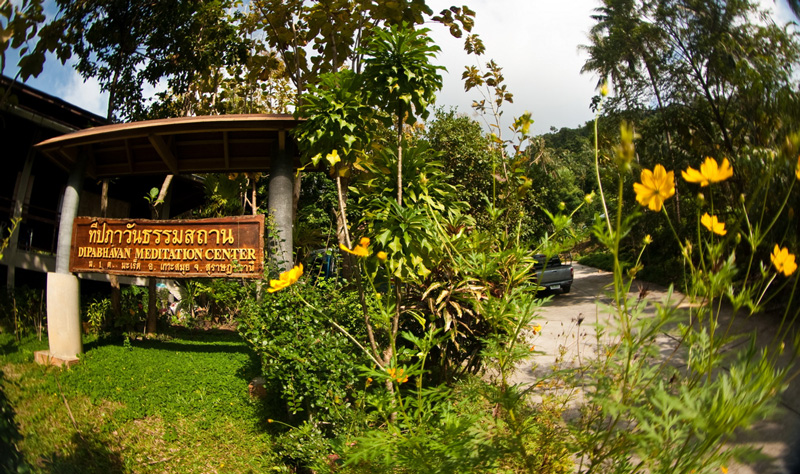 The center has been open for foreign tourists since 2005. Ajahn Poh, the current abbot of Suan Mokkh, is the founder of Dipabhāvan. Since the beginning, he and other monks from Suan Mokkh come to Dipabhāvan every month to conduct a retreat. The Dipabhāvan course is close to the course conducted at the Suan Mokkh International Dhamma Hermitage. In Pali language “Dipabhāvan” means “a place of light”, the light of the Dhamma (all existing things).

In December 2011, 45 people came to the retreat. Among them 17 from Russia — it was a new record for the number of Russian visitors in Dipabhvan. On the second day 5 Russian people left. Then I didn’t keep up with this process but on the last day I found the room only 2/3 filled.

I wondered why people leave. If you’d been at the meditation retreat and decided to leave – what’s the reason? I’ve heard answers like “silence is not for me, I can not live without music and dance”, “because it is very difficult: to get up at 4.30 am, meditate all day and do nothing”.

Really, it is not relaxing as it may seem. It is constant overcoming yourself and excellent training of self-discipline. 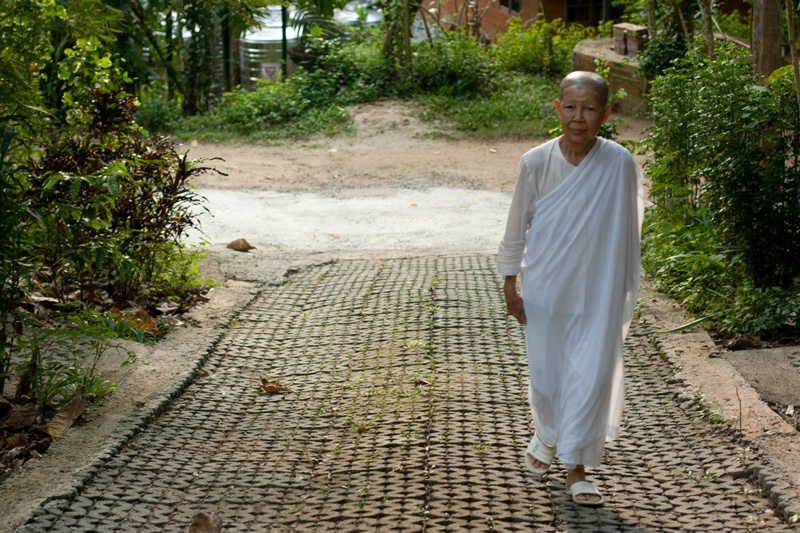 There were several things that caught my thoughts during these days. Fortunately, to be honest, I didn’t take a notebook and pen. That’s why now I find it difficult to write about these things in a regular way…

Buddhism is not a religion, but a philosophy. Nobody asks you to believe in anything. Buddha was a real person who’d been seeking for the truth for many years. He was sitting under a tree and achieved enlightenment. He realized what the truth is: it is the moment happening right now. The past has gone, the future has not come yet. At the moment there can’t be thoughts, only mindfulness.

Ego is an illusion, because ego is just a bamboo empty inside. Inside, we are not a person but the whole essence of being. Do you agree that strength of a whole being is much cooler than strength of a single person, which is really just an illusion.

It’s strange for me, but monks at the retreat talked much about suffering. I always thought that Buddha was a cheerful man who didn’t think about suffering. But the monks thought and talked about it, and also said that happiness doesn’t exist. But what about great lunches, this incredible beauty and life of everything around us… And what about the incredible happiness that I feel on my way to sleep after all meditations!

Many things are prohibited at the retreat. For example, using drugs. But with such concentration practices you don’t need “grass” or other substances — your awareness is already expanded.

One day I saw a three-legged cat. Then it came to me at night, but I didn’t let her jump on my wooden bed fenced with mosquito net. The next day I saw a pearl ant. It was a usual big ant, but pearl-colored. I was looking at him for about three minutes, then I looked at the red ants. 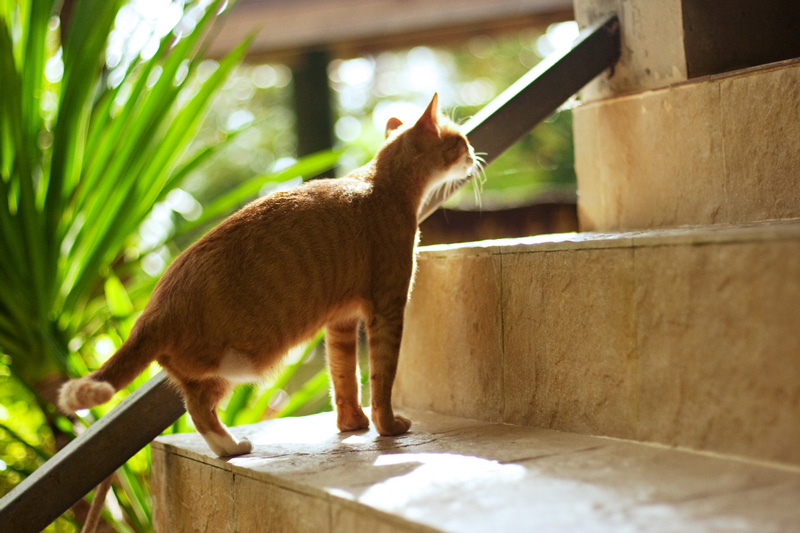 Two of them caught a beetle and tried to keep it on a concrete wall. Third one went to the crowd of red ants staying aside from those two and told them something. After a while they walked to the beetle and helped to drag him down the wall. One ant turned to me, and I was quite confident when we were looking into each other’s eyes. Being oblivious, we’d been standing for a long time. Then I left.

I saw how a snail crawling on a leaf ate mud droplets on its way. Through the transparent skin you could see how lumps of food passed through the gullet and got dissolved inside the body…

I noticed some unknown plants, patterns on leaves, drops of rain in which you could look like in a magnifying glass. And I didn’t think about my camera. I didn’t even think at all. 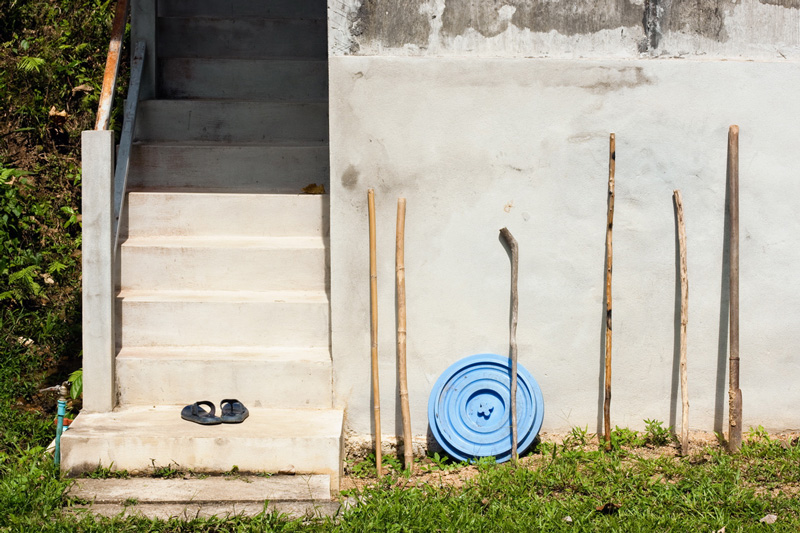 When you arrive to the retreat, you should choose a work that you will perform every day for about 20 minutes after breakfast. I was among the last newcomers and all “normal” work (such as washing dishes) had already been selected. Cyril advised me to choose cleaning toilets. It looked like I was going to clean my karma along with them.

I’ve never thought about cleaning karma before, but my karma decided it for me and the next day we began to get cleaned. It turned out, however, that this was one of the easiest work, because a female toilet near the meditation hall doesn’t look like a public toilet in Russia. It’s almost like a toilet at home.

I will never forget this incredible feeling when, after breakfast, everyone goes to perform some kind of work. You’re satisfied because you shouldn’t sit and meditate: you’re going to work, which will last no longer than 20 minutes, and everyone around is also beginning their kind of work. Even men are sweeping the leaves from the tracks and cleaning their toilets … It’s real happiness:)

Meditation on the retreat

5-6 hours a day here are devoted to meditation, and about 2 hours to communication with Buddhist monks. Actually it’s a monologue, as nobody but a monk and a rebellious mind inside your head can not speak. 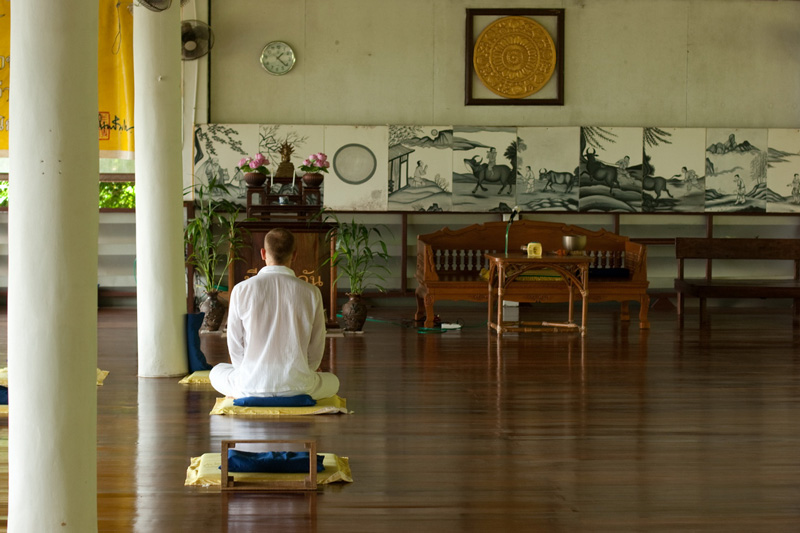 Almost an hour is occupied by morning yoga, about 20 minutes by work (sweeping paths, etc.), 2 hours by eating, and about 2 hours by rest, during which you can take a shower.

Officially, there are three types of meditation practiced in the center. Anapanasati is watching your breath. It’s called “Sitting meditation” in the English version schedule. It’s my favorite meditation, in which I hope to succeed one day)). And it’s a difficult meditation too. Why? It could be easier to understand if you try sitting on the floor at least half an hour. But sitting meditation helps me see my thoughts as from the outside. 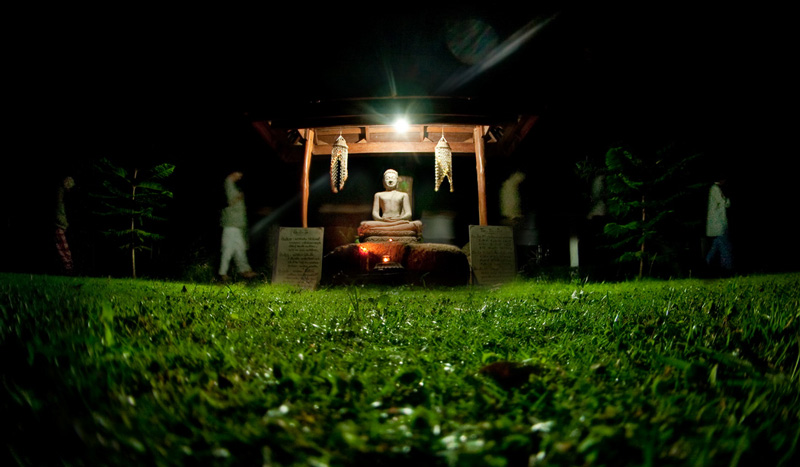 The second meditation is Walking one. If you want to understand what it is, get up and try to focus on the sensation inside your feet. Be aware of them, be aware of every movement of your feet, and then make a few steps. There is “three-stage walking meditation” practiced in Dipabhavane – it means that you need to understand how your foot leaves the ground, sweeps over the ground and how a whole foot stands on it. The monks also practice a five-stage or more detailed walking meditation.

Try this meditation right now with the people close to you. After a few fully conscious steps, take a look at each other and you will see that we look like a “zombie” while walking on a meadow of Dipabhavan)). But really, it’s a very cool training.

The third type of meditation is meditation of love. Half an hour we think about all good things related to our family, friends, close or not people, etc.

I’d define two more types of meditation practiced in Dipabhavan. It’s eating and sleeping meditations. Although there much more types, but it will be enough for now.

Eating meditation. It’s incredible and my favorite one. The morning only begins but I’m already waiting for an evening, then I begin to wait for breakfast, which happens at 7.30, and then I start waiting for lunch – i.e. 11.30. Food here – I do not know exactly what it is — it’s so delicious! It can be fried leaves or flowers, some strange balls, always rice and various gravies, sauces … And the most important is dessert!

In general, this meditation gave me a full understanding of happiness existing in the present moment – the genuine Sachchidananda. 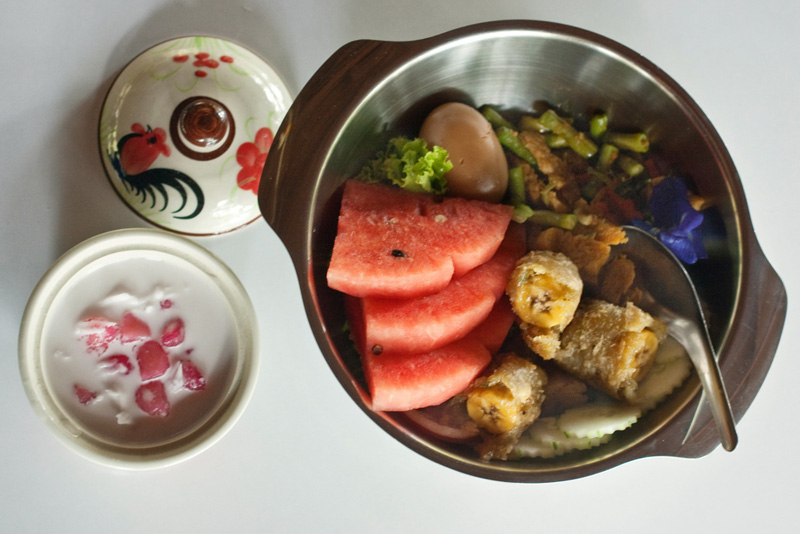 After lunch, the most newcomers probably had a sleeping meditation. It was so happy time. But on the last days there was no need in day sleeping. 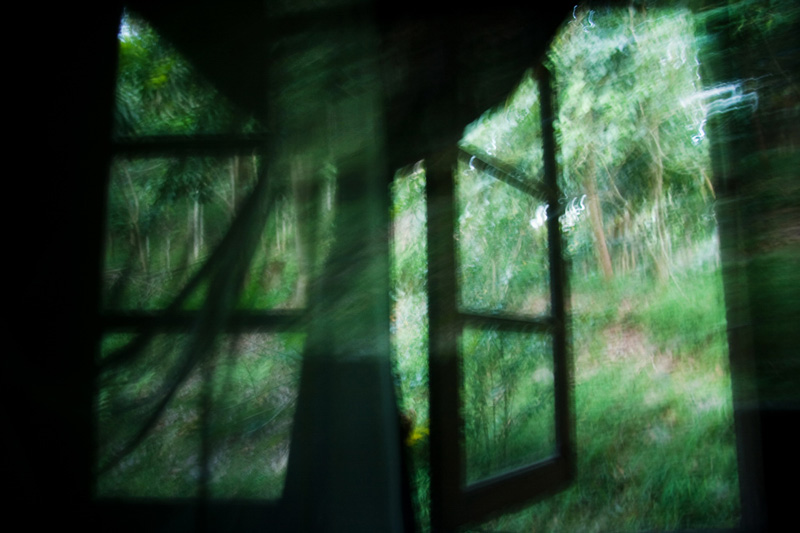 On the last day, it was very strange when we got an opportunity to speak again. Sometimes I still can’t find words in Russian and I’m constantly trying to say phrases in English.

There are some more important things. Retreats in Thailand meditation centers are free, but everyone can make a donation.

Six days, it’s like nothing at all. It’s just like an attraction for those who come to Thailand. If you take it seriously, perhaps you can arrange a week-long meditation more often, or you can go to a Buddhist monastery for 21 days once a year.

The center described here located in the north of Thailand. 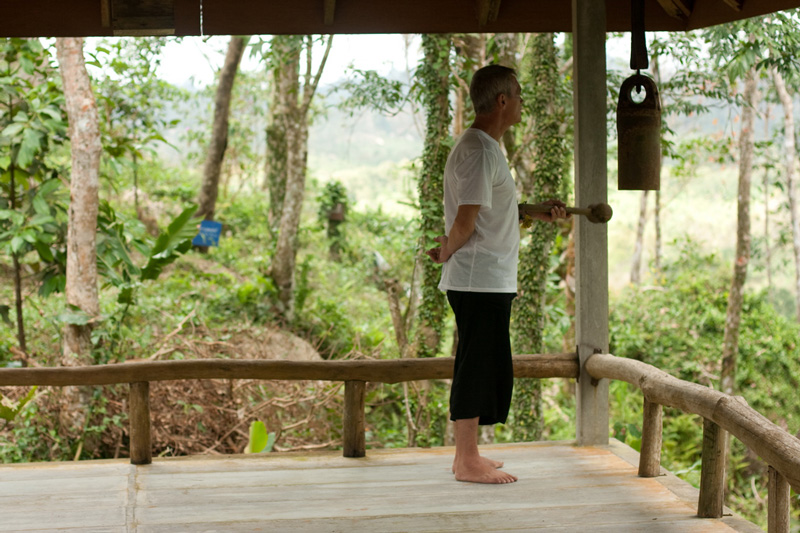 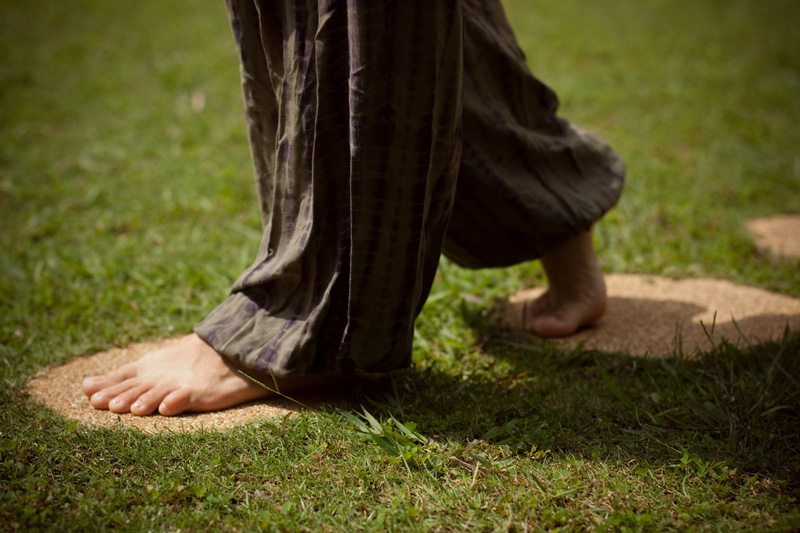 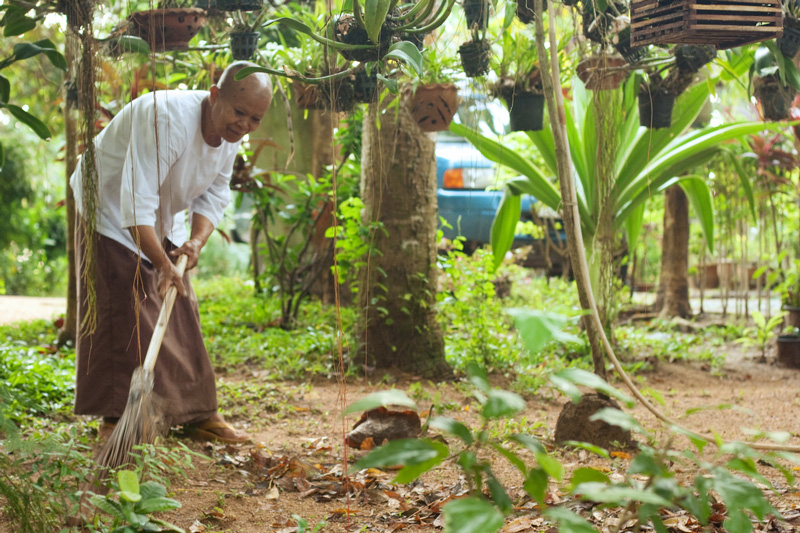 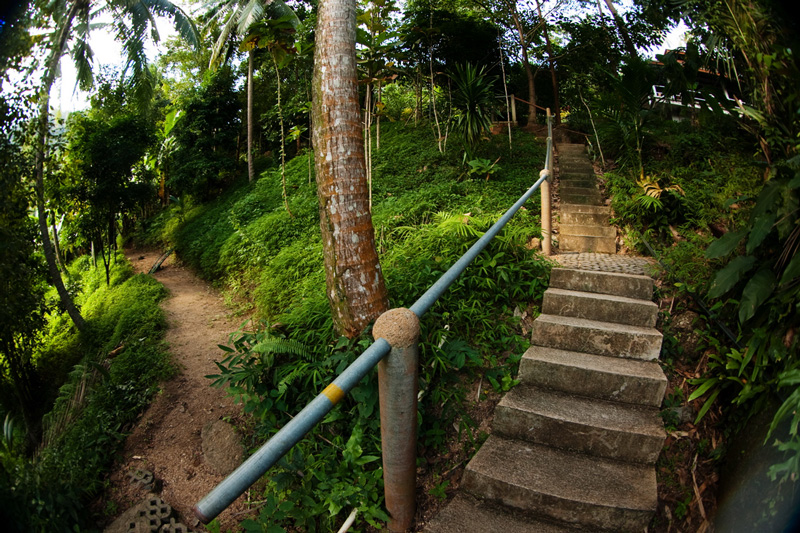 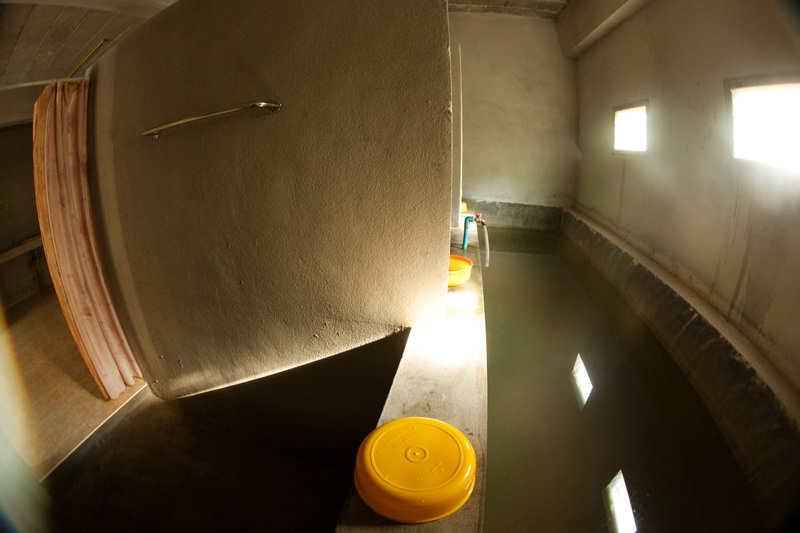 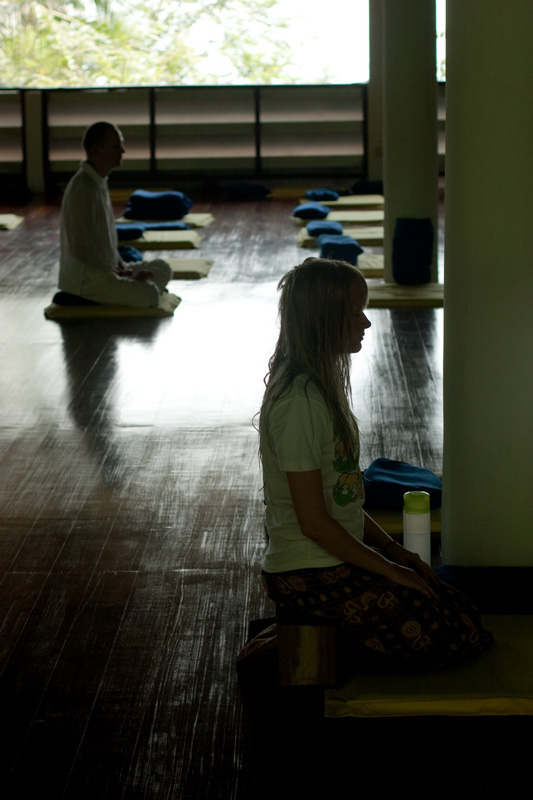 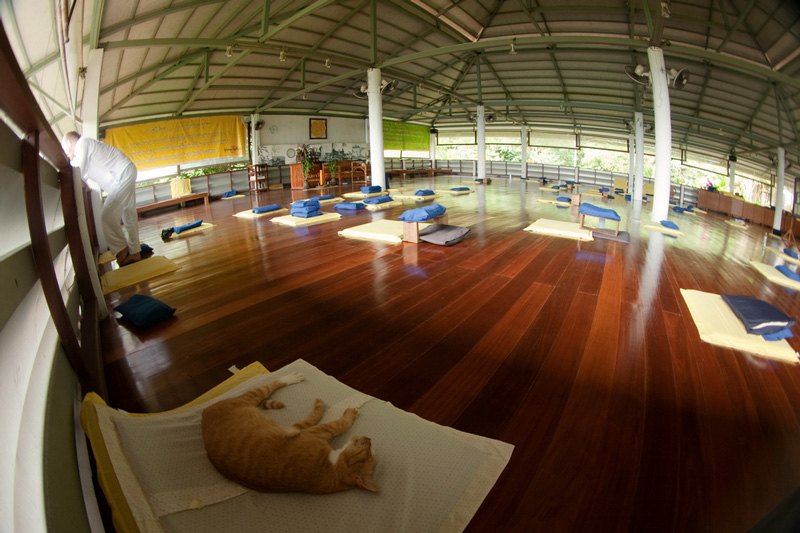 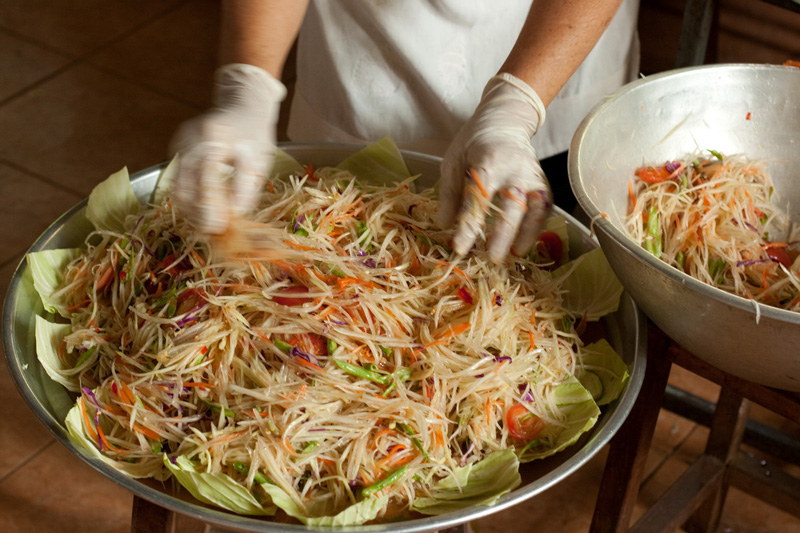 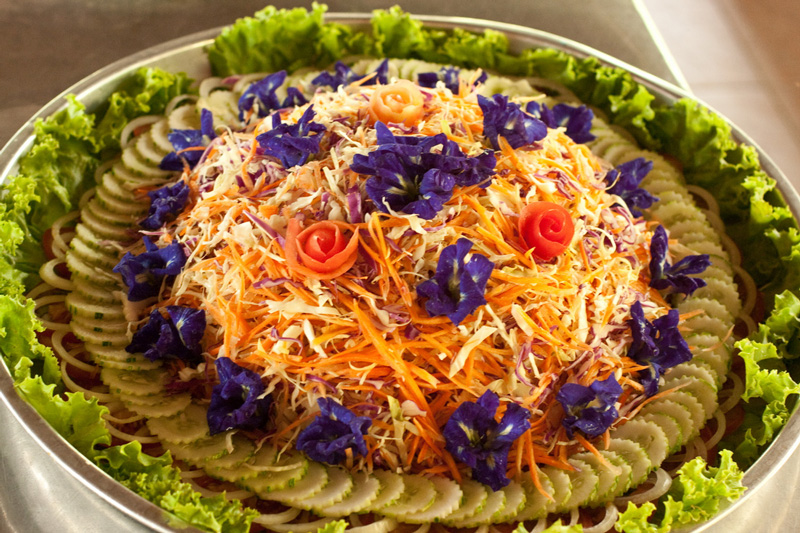 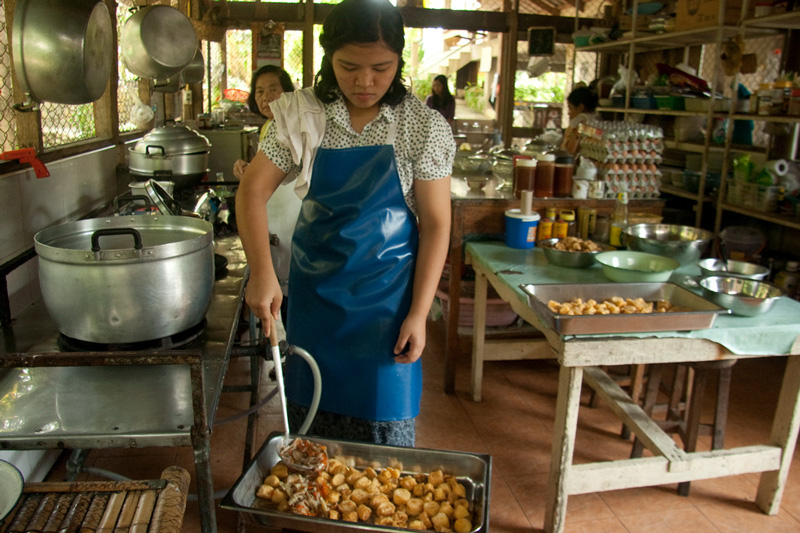 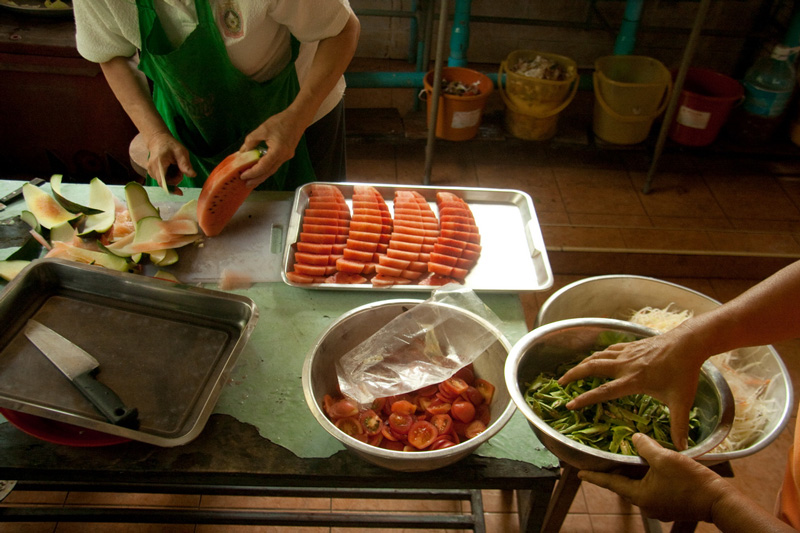 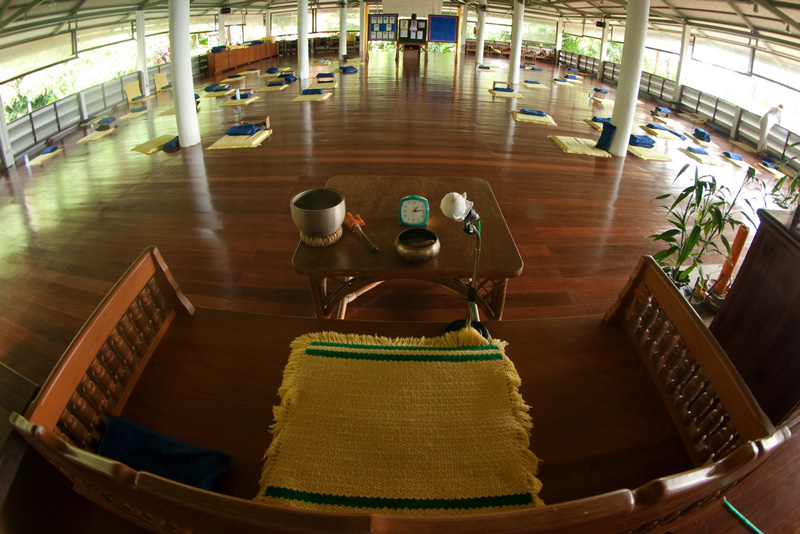 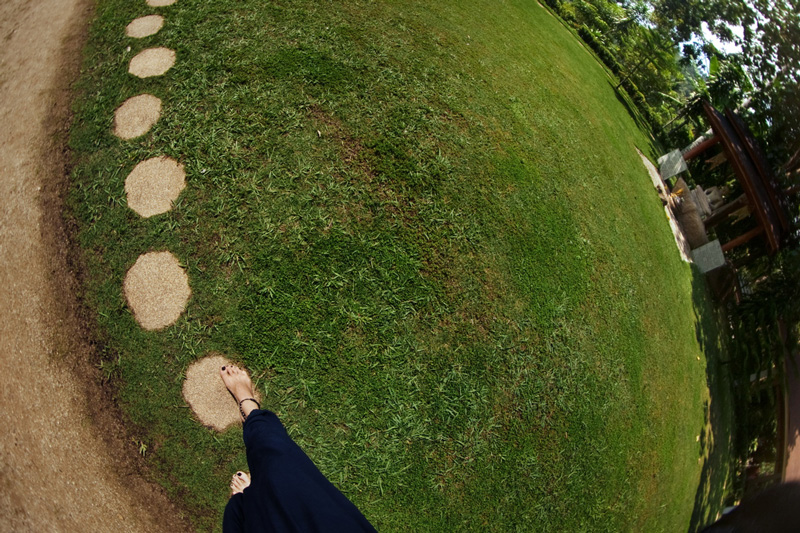