About revolution in Bangkok from witness

…The way from the bungalow to the sea shore was very long. After an unexpected meeting with a giant cyborg-frog, I saw a huge car in front of me; it was sparkling and glistening. I had already understood that fairytale around us is a usual phenomenon, and we have to see such cars every day right after frog-cyborgs… That is why I was not surprised at all when, having approached the car, I understood that the sparkling car was actually a trash can, and the wonderful people at whom I was unrestrainedly smiling are Thais collecting trash from the trash heap…

Later, I had to pass through insurmountable obstacles on the way: step over branches, run surreptitiously past a monster that tried to look like a root of a dry tree…and when I finally passed through all that unbearable beauty of the existence and reached my friends who were lying around on surrealistic sand of a dreamlike beach in happiness, I was worried by Katya. She was sitting and wagging her head, as if in tune with some unheard music… I was scared by her abnormal look and asked her: why are you swinging?

— Because I am a waterweed…

That’s when I understood everything.

It is so obvious: there is this mass of fresh water above us, and here are the air bubbles getting up…this water was swinging us, and we just couldn’t resist it, because we were waterweeds… To show her that I understood her, I started giggling loudly…

…Then some demons came to get us, worms started to swarm under our skin, and it was the inevitable end of us all… Do not eat magic mushrooms, the beauty of the world is too unbearable for our open eyes. 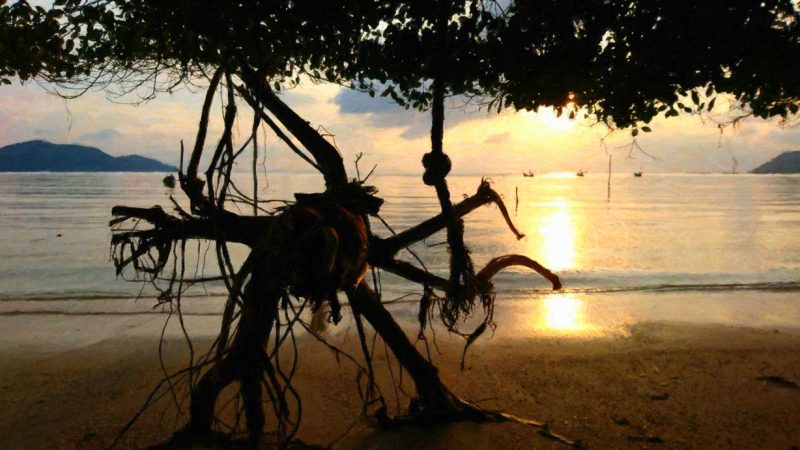 Is it dangerous to eat Psilocybin mushrooms? Warning

Vomiting, coma, insanity. Of course, it is dangerous. Mushroom trip can be “bad”. One of my friends “almost died” having lain for many hours alone at home. Before his mind switched off, he understood that he couldn’t even take a phone in his hands to call the ambulance.

→According to Wikipedia, mushrooms can affect your mental and physical health.

Prison. In addition. Mushrooms are officially considered drugs in Thailand, and one can find himself in prison for taking them. There, all the beauty perception will quickly disappear from your head, and the world will not seem as multifaceted and wonderful.

Magic mushrooms in Thailand refer to the 5-6 drug groups (as well as marijuana and cannabis) and can cost from 100 thousand to 1 mln baht and one year of Thai prison to those who want to try them.

How much raw shroom to eat?

The last thing from ordinary life I remember is the question: how many mushrooms per person we need to eat. Some Englishman, a friend of somebody, said 4-8. We searched in Google and found that it’s about 10. We decided to each 8 mushrooms per person, but when we were placing the mushrooms into the mixer, we just decided to add more… 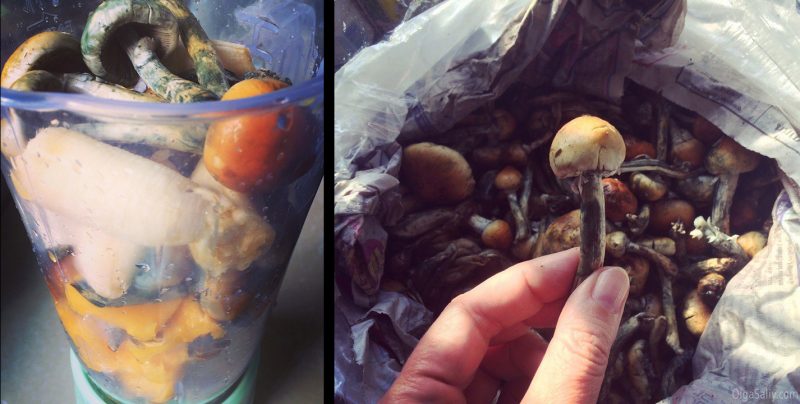 The Englishman was right. If we had listened to his words, we would probably no have had the side effects of regular nausea and working helicopter propeller inside your head.

But it is not important any more.

We sat in an arbor at the seaside and started waiting for what was going to happen with us. Google had warned us that the trip starts about 40 minutes after you eat the mushrooms. To get a better effect, you should close your eyes and lay on your back. About half an hour later I understood that I was giddy, and I didn’t like it at all. Because I just did not feel well. I got a feeling that I will not be able to stand up from such laying or then even sitting positions, because I didn’t feel well.

Beginning of the mushroom trip. We entered the door of a wonderful world

The first thing I remember after entering the trip: we are walking on the coast, my feet finally feel the water, it is warm and refreshes me, I feel much better. I look up to the sky and hear how I am asking my boyfriend in surprise: “Do you also see it?? Is this sky as blue as I see it??” 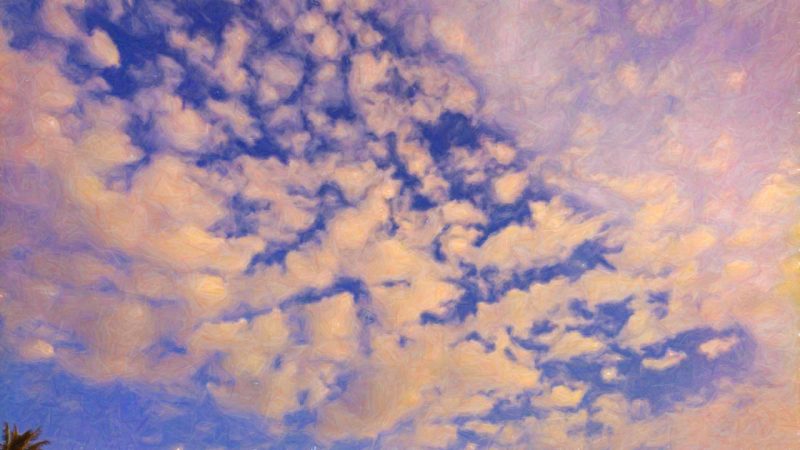 — And the clouds are also so three-dimensional? Are they really like this and do you also see it???

I take my phone and make a photo to later look at them with my usual eyes, because I just don’t believe that they are usual – they look like on stereo pictures.

All other people around merge into some mass of a faceless cloud. Like in a film about Vietnam, in a scene with military actions: a lot of small people are rushing somewhere, and it is not important at all what is happening with them, how many of them are blown up by land mines or killed by bullets.

The main thing at this moment is the presence of “your people”. Those with whom you ate the mushrooms. As only they understand you, only they are with you in this incommunicably wonderful world. 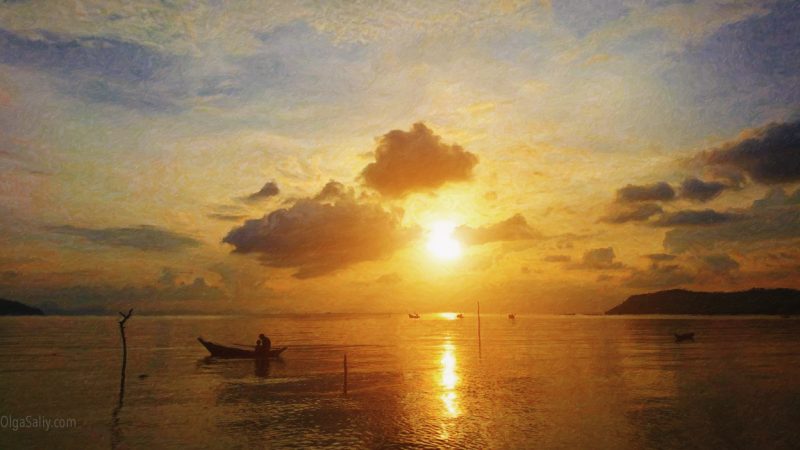 Close, but sober people seem extraneous. Though it is nice to have a reliable hand of a person able to take you through all invincible obstacles and show the way to the bed…

When I finally found our guys,

I understood that here they are, my dear people. And there should not be any sober people with us. A sober person is extraneous in a mushroom group.

Then we were sitting on the coast and thinking that we were extremely lucky: questions like “Is it so beautiful only today???” were asked many times. The world made a big show for us: first it was an unbelievable sunset with a light a photographer can only dream of… 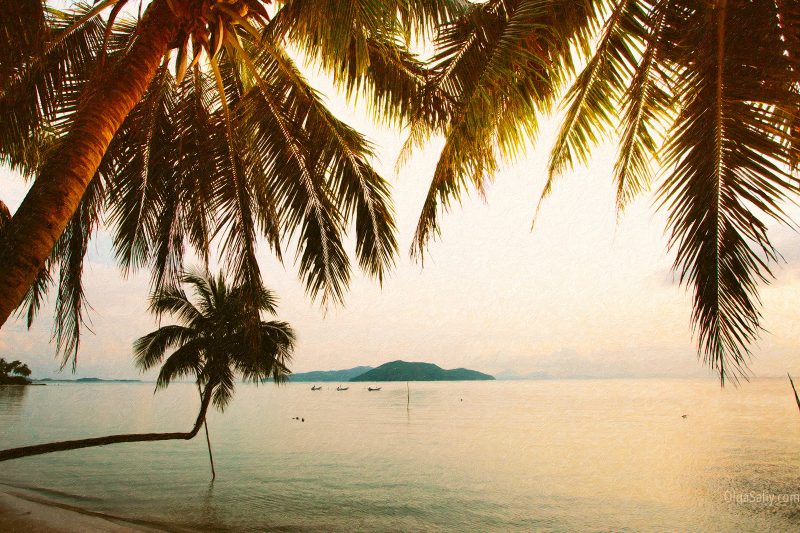 Then I saw real Thai landscapes with a gauze and palms that I had seen only in very hotshot photographs. I thought: “Here, finally! Here it is – the real dream Thailand. All tour operator definitely eat mushrooms before they advertise it!”

It turns out that this beauty lives with us every day, and we just don’t see it. In the mushroom trip, we became most focused and started to see this beauty, not getting distracted by anything, because all thoughts disappeared from the head completely. All worries and calculations remained in another dimention, we were absolutely united with the world and saw it a lot more distinctly and lucidly.

The time goes slower. The number of shots per second increases, and you have enough time to see many more details. But, while the time becomes slower, it becomes very difficult to speak, because the sound is heard as if under water – it takes too long from the moment the word is uttered to the moment when it gets to the ears of those who listen. In addition, all words become unimportant…

It is important not to get stuck on one place, thought I.

The guys were so flabbergasted by that beauty that they were sitting on the beach and gawking into space – the infinite expanse of the sea, 3D palms and clouds, asking each other again and again: “Do you also see it all?? Is it so beautiful only today or it is always so here????

I could not sit. I first started to walk not to feel so bad, then I took Katya to “dissipate her internal helicopters” as I knew exactly how to do it. I told her: believe me, I know. We started walking forward, and the helicopters did disappear. And there was a new world ahead of us, with magic trees, surrealistic patters, soft and warm sand bumps under our bare feet, and we also got to the glistening sea…

And then I understood that it was actually the same usual southern beach on Samui, where it is usually nothing to do, as it is kind of unsightly and shallow. And that in such a way all other usual places can turn out as beautiful. 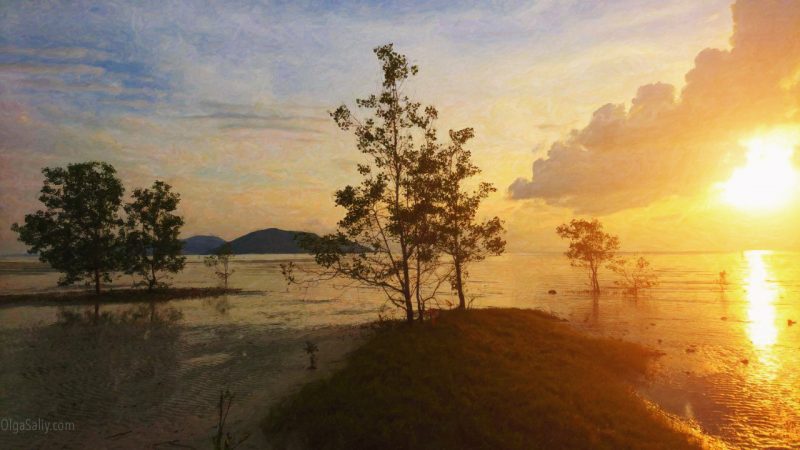 I need to urgently get to the shower. Urgently. First, I am cold, and my hands sometimes exist separately from me. Secondly, it is necessary to feel urgently all possible manifestations and manysidedness of that cubbyhole, feel magic streams of hot water on my skin…

And you know, the four-wall shoe box of a room that I had seen many times, really seemed wonderful. I saw every square of tiles on its reinforced concrete walls, every dot of the tropical mold after a Samui flood, I was standing in the warm shower and wanted to feed all people in the world with mushrooms, understanding that I won’t be able to find words to explain it…

How long does a mushroom trip last?

Our cocktail of infinite admiration included from time to time some waves of nausea and loose motion in stomach. The Englishman was right – 4-6 mushrooms are real deal. We pitched it a little bit too strong and put twice as many mushrooms into our shakes…

That is why the question “When will it all be finished??” was heard almost as often as “Do you also see that beauty???”

It started coming to an end after…..hours…well, it’s not important. 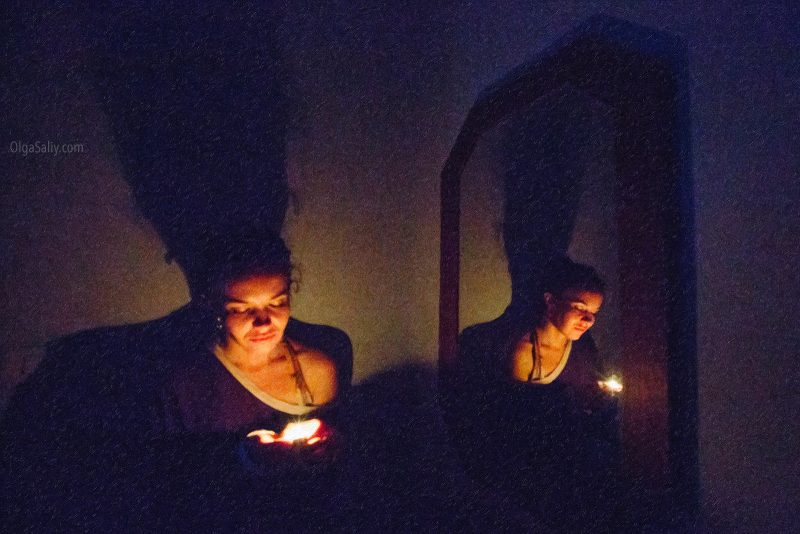 The beauty around us will never finish. And our “trip” lasted about 7 hours.

Gradually we understood that our vision was clearing, but if you tried to focus, the understanding of the beauty was still living inside us…

Where you can get magic mushrooms in Thailand

It is possible to buy mushrooms in Asia at elephant farms (but remember, that you can be put to prison for that.) Because magic mushrooms grow on elephant flops. In some bars in Thailand and Bali, they sell mushroom cocktails, but they are as a rule very soft, and it is quite probable that you won’t feel anything.

*All photos in the article were made during the mushroom trip. But actually it is not real to take photos during this time.

I wish everyone to see beauty independently of what you eat, drink or smoke, as it does not disappear – it is always around us all, just pay attention to it.